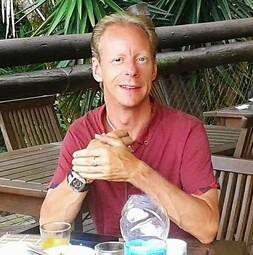 My name is Paul Dobree - Carey. I used to work in the corporate world but I just couldn't play the roles that were expected of me and always ended up doing my own thing. I wanted to find my passion and I tried so many different things but nothing seemed to fit. After reaching 40,  I took a trip which resulted in a completely unexpected Life changing experience.
Going through my own Awakening Process  has brought to me some amazing insights and practical methods as to dealing with the multiple changes in life style, rigid belief systems and personal mental and emotional conditioning. It is truly remarkable how little we actually know of the world until we awaken and really start to live the life that we always wanted to have. ​Having experienced much of the diversity that Life has presented, I have a strong belief in practical experience and have spent many years dealing with and studying what does and doesn't work on a daily basis.
And yes, why does an Englishman who never previously did Yoga, meditation or ever had any form of Spiritual Experience suddenly become spiritually awakened and how has that impacted my life in every way?


​In 2009, Paul Dobree-Carey experienced an unexpected but profound enlightening ‘tuning in’ process involving the illumination of the Third eye whilst in Tunisia, North Africa. The rapid expansion of 'Intuitive Awareness' resulted in a Kundalini Awakening on 14 June 2009 at 3.33pm. Within a few days of experiencing complete physical, mental and emotional trauma, the total integration with a Higher Self aspect known as a 'Walk-In', took place on 18 June 2009 which harmonised the effects of the powerful Kundalini energies. This was followed by the introduction and  embodiment of the illuminated wisdom and expansive energies of the star consciousness - Polaris AB, a dwarf star located within the corona of the current North Star, Polaris.   Polaris AB is an emanation / aspect of Polaris in the overlighting form of the Cosmic Scribe / Messenger.

​Since that time, Paul has received direct communications in the form of Language of Light Sacred Geometry and cosmic spiritual knowledge which has brought forth an amazing wealth of information regarding the true Nature of Spirit, dimensions, energy fields, evolution and the creation / manifesting process together with amusing and curious conversations with planetary beings, crystal beings and Keepers of the Records of the Akash, Library of Sophia and the Halls of Amenti. Among the channellings received are communications from Metatron, Thoth, Maha Chohan, the Elohim and the Great White Brotherhood (a collective of higher beings of Light, nothing to do with race or gender) in the aspect of Polaris, the Guiding Light known as the North Star.
Who/what is Polaris AB?
Polaris AB is the name officially assigned to a Blue Dwarf star located close to the brighter and better known Polaris, currently the North Star. My own StarSeeded origin derives from the Carian Bird Tribes of Sirius known as that of I AM RA, Keeper of the Law of One, studied and practised on the Isle of Poseida in Atlantis. On the 18th June 2009, four days after a full Kundalini Awakening, in my newly aware capacity as a grounded operative of the Blue Ray vibration, a Soul Aspect merger took place with the energised StarLight of Polaris AB seeking incarnation to assist Gaia’s Ascension process.
The descended embodiment of Polaris AB connected me directly with higher spiritual communication and works directly with energising and ionising the Blue Ray to its higher aspect frequency, Silver Violet flame. This flame is used for transmuting energy densities within the collective consciousness, transforming emotional and negative imprints within third density earth's electro-magnetic grid via Sacred Sites, grounding higher cosmic and Central Sun energies into the Crystalline matrix. The Silver Violet flame is also energetically used within the Crysto Sun Discs which hold divine blue prints of all emerging civilisations and collective social memory complexes.
Polaris AB holds the combined transmuting frequencies of the silver-violet flame which manifests the angelic energies of Zadkiel and the alchemical and algorithmic transformative energies of St Germaine.

Realisation of past lives and resonant energetic imprints have brought forth knowledge of former roles and titles:
Scribe and Record Keeper for Polaris, the Guiding Light
Sacred Fire Keeper of the Indigeneous Tribes
Crystal Master of Atla-Ra, Law of One, Poseida Temple of Knowledge, Atlantis
Brother of the Temple of the Seven Rays, G.W.B.
High Priest, Architect and Divine Scribe of Mu, Og, Sumer and Khem
Mahatma Dhruva Nakshatra Das
Personal multi-dimensional higher aspect guides in the form of:
Walk-In 18th June 2009 - Higher Self Aspect

Walk-ins represent Soul Aspects from other dimensions, who 'awaken' in the body of a person here on earth. In all cases, there has been a Soul contract agreed between the arriving Soul and the originating Soul that has occupied the body since birth. Walk-ins use this method to enter the earth plane at a point when their specific mission requires it start soon after they arrive. Their mission necessitates they skip the birth and adolescent stages to transform directly into an adult body. Yet this is not always the case as some walk-ins, can arrive within a much younger body, however proves an exception rather than the rule. When a child walk-in occurs, it is because the soul coming in, needs experiences of childhood and adolescence to form a foundation for their specific mission. So childhood and adolescent walk-ins, usually don’t awaken the consciousness until they reach adulthood.

Clear Indications of a walk-in are:

1. Walk-ins usually occur during rather traumatic events in the host soul’s life, as with a severe illness or a car accident. Many come in during a near death experience and is the most common way for walk-ins exchange places, but is not the only way this transpires. But in most all cases, the actual walk-in transpired when the host is unconscious.
2. Almost overnight, the host suddenly has little or no connection with some of the family members.
3. Divorce occurs just before or within a short period after the walk-in has arrived.
4. The host can experience physical pain in the neck and shoulders not present before the walk-in.
5. Sudden changes in tastes with food, clothing, hobbies and personal interests.
6. There is also a loss of coordination, even memory lapses, along with trouble delivering speech.
7. A sudden dip of interest in career and hobbies as new paths are created, along with a sudden interest in all things spiritual.
8. A very strong knowing they have a specific mission to accomplish, though not remembering the exact details which gradually rises to the forefront of memory.
9. The walk-ins generally still carry the crystal gene.
10. Some retain memories of their home world or mother ship and have specific off world memories. They retain the memories of their former incarnate forms without the associated emotional attachments or triggers.

Walk-ins, actually retain a far bigger, more challenging role on earth because they've spent most of their incarnation on another plane of existence and then come to earth in the middle to later parts of an incarnation. They may find living in these times an extremely difficult and 'alien' prospect.